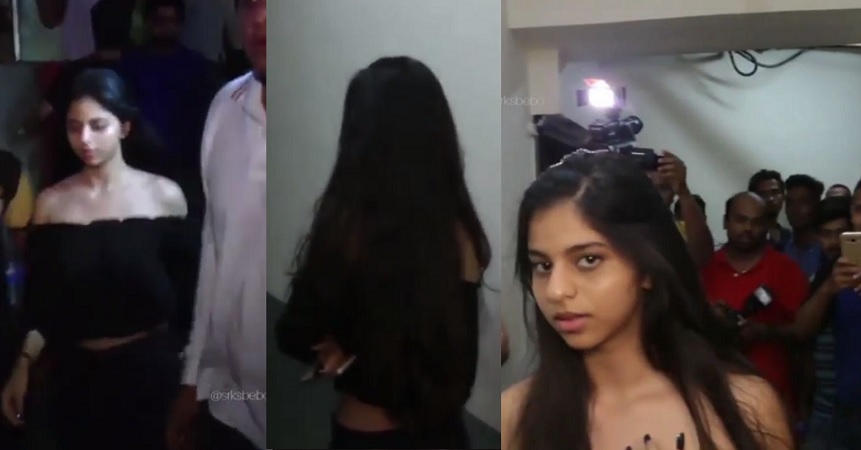 Recently, Suhana Khan attended the special screening of Salman Khan's film "Tubelight" with her dad Shah Rukh Khan.
While SRK left the Audi and went ahead Suhana, she followed him after couple of minutes. And within those moments, Suhana got mobbed by the cameramen who were waiting to catch their glimpse.
In the video that's making rounds on the social media, Suhana can be seen scared and worried as the media persons came too close and that too in big numbers to click her pictures.
Also, this time there were no bodyguards around her to protect her. The distress and fear on her face is clearly evident.
Even after the cameramen hounded her, she still maintained her calm and kept herself composed throughout the ordeal.
Watch the videos here:

Clicking pictures is acceptable but going this far and stooping this low that we actually hares and scare a star kid is not acceptable. They aren't used to the kind of limelight that their parents deal with everyday. With kids there should be a limit that we shouldn't cross.

BeyondHorizon 3 years ago Its really sad that media can stoop to any level to get their so called bytes. Disgusting.

A HUGE FAN 3 years ago Poor Suhana! Media people can be so cruel. Leave the celeb kids alone.

Addictedlove 3 years ago Those ppl who are bashing srk that he didn't prepare his kids for limelight guys this is 16yr old girl and not used to of this teasing n all.as she studying abroad too.media ppl need to give space.all they need is there bytes n pics they don't even spare funerals.just check Akshay or aishwaya father funeral n prayer meets where celebs have to pose n give pics n bytes.
This is all media they need to be educated.
Suhana looks like she is in panic attack.any normal kid will do that n I don't get why srk is getting bashed.and why ahaan panday didn't step up to save her friend at least would have made a boundary from hand ,I hope srk takes his class too.

Piggies 3 years ago These media people are disgusting! Let the girl have some privacy and leave her alone. This is straight up harassment, guess these cheap media people have no sense of personal space.

edella 3 years ago She really looked scared and tensed. Star kid or not, any girl would have had the same reaction.
And that ahaan pandey or whosoever that hat guy in white tshirt was.., felt like as if he was enjoying the scene. Surely Media ppl have a job to do but they must know where to stop.

iPerfection 3 years ago Those cameramen are disgusting tbh!
And it's sad guys to say this but she must learn to handle these kind of embarrasing situations, she has to prepare herself for the showbiz until she becomes like the rest! Glamour/film world seems very light and interesting from outside but the closer you get the darker it is actually! Every other star kid is preparing themselves like this.. in few years Suhana will look straight into the camera and walk away. This is the basic step every celeb takes and must follow when they join the film industry! It's sad how she is just 17 and has already so much pressure on her! Being a star kid has its own benefits but it sucks big time too!

josh135 3 years ago That's very scary and look at that ahaan pandey smirking at the back. Seems like a very sly fellow

Shaina_b 3 years ago Why isn't her bodyguard with her??

Honestly anywhere they would hound her!!!!

ukgal62 3 years ago Shit...being in the limelight and famous and all that is a dream fur many, but seriously wouldn't want that kinda life! Stupid to have left her alone with these bunch of clowns and especially in a country where there's stupidity to its heights with men! Outrageous... Makes me mad..:(