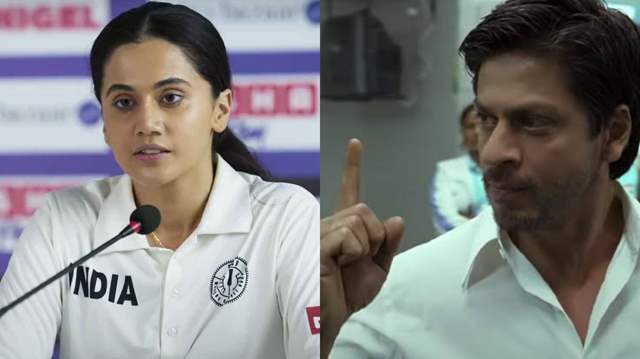 Taapsee Pannu is leaving no stone unturned for the promotion of her upcoming film Shabaash Mithu. Now, according to a report from Pinkvilla, the climax scene of Shah Rukh Khan's Chak de India turned out to be the source of motivation for Taapsee Pannu for her movie Shabaash Mithu?

Well, King Khan's portrayal of Kabir Khan has left us all speechless. In fact, millions of people were moved to tears by the inspiring message given before the championship game.

The report stated that Tapsee revealed that she watched the movie several times for encouragement while shooting for Shabaash Mithu. She said

"When I first heard that speech, I was prepared to sprint through a brick wall. That is a classic and a famous moment. I believe I keep returning to the movie anytime I need inspiration or motivation. I used to suggest to my coworkers, the females who were playing with me, that we watch Chak De before we start recording our climax in order to get into that mood for this movie, especially Shabaash Mithu. That was really helpful."

For the uninitiated, Shabaash Mithu is the biopic of ace Indian cricketer Mithali Raj and Taapsee will be seen playing the role of a cricketer for the first time on the big screen.