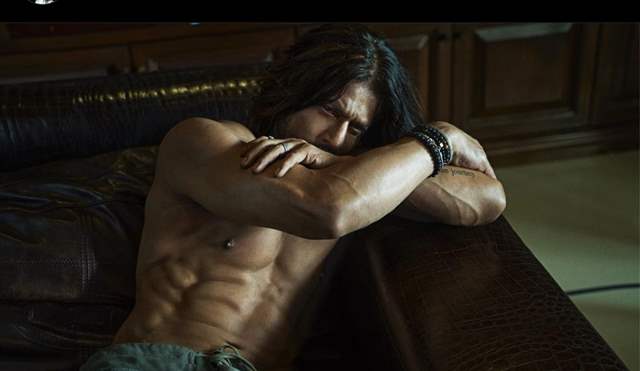 Well if by any chance you are having a dull weekend, King Khan has a treat for you which will definitely glow it up. The king of romance who is gearing up for his upcoming film Pathaan took to his social media handle a few minutes ago and shared a glimpse of his look from the film which took Instagram by storm.

Shah Rukh shared a shirtless picture of his, flaunting his washboard abs and messy long hair. He can be seen sitting on a couch with his arms folded. He is sporting green joggers and one can surely notice his biceps and arm veins.

Fans went bananas over this flamboyant look of the actor and flooded the comments section with hearts and fire emoticons.

After staying away from the big screens for 4 years, fan’s cannot wait for SRK’s comeback.

But soon the wait will be over as the superstar has 3 mega releases in 2023.

The teaser of his upcoming film Pathaan was already unveiled few weeks ago and it had generated a massive frenzy amongst fans. The Siddharth Anand helmed film would also star Deepika Padukone and John Abraham in pivotal roles. The first looks of all the 3 actors have been out which is adding to the excitement of the audiences.

Apart from this SRK will also be a part of Atlee’s Jawan starring opposite south actress Nayanthara for the first time.

He will make his debut collage with director Rajkummar Hirani in Dunki. The film will also feature Taapsee Pannu and Vicky Kaushal.