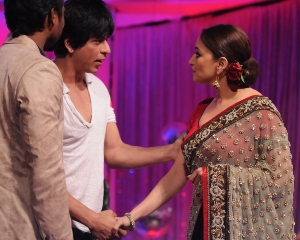 Sony TV's Jhalak Dikhhla Jaa 4 - Dancing with the Stars is very much starry, after being glutted with big names from both the Television and Bollywood industry and the icing on the cake is the presence of the sensational Madhuri Dixit as judge. But what if the show sees another grand starry entry? Nehle pe Dehla,  isn't it?

Well, here is the news. The performers and the judges got a jhatka when Shah Rukh Khan entered the sets of Jhalak Dikhla Jaa. Shah Rukh was shooting next door in Filmistan Studios for his upcoming movie Ra.One and could not control himself when he heard that his old co-star and screen love, Madhuri was shooting there as well.

Our source says "Shah Rukh had come on the sets of Jhalak, but had been there only for five minutes because he came, keeping his shoot pending just to meet his dear friend Madhuri. Even the actress had a pleasant shock to see her old co-star. The crowd assembled on the sets was shouting the name of SRK continuously".

"After both their respective shoot, the actors spent nearly two hours speaking about their kids and Shah Rukh said whenever he comes there to shoot in the studio he will definitely drop on the sets without even getting permission" adds the source queerly.

As we say all things come in short packages and those 5 heavenly minutes with The Khan left everyone in an absolute state of exhilaration!!!

Catch this starry interaction between Madhuri and SRK in Monday's episode of Jhalak Dikhhla Jaa..

dil to pagal hai is my fav movie

+ 3
10 years ago OMG i cannot wait for this episode!! ahhh i love their jodi