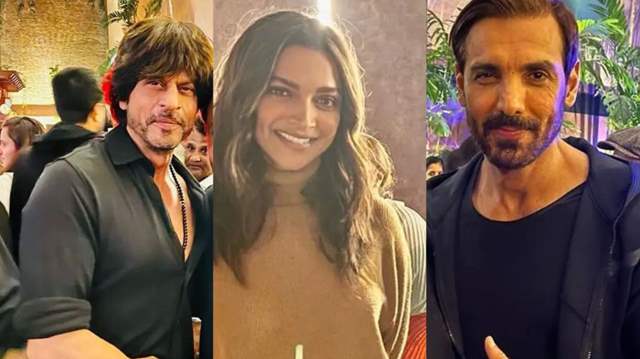 Pathaan, Shah Rukh Khan's eagerly awaited comeback movie, opens in theatres today (January 25, Wednesday). After an absence of more than 4 years, SRK is making a comeback in the spy thriller directed by Siddharth Anand. Deepika Padukone and The Badshah of Bollywood are teaming up once again for the prestigious production, which is funded by Yash Raj Films.

The Pathaan team saw a special screening of the movie on Tuesday night in Mumbai before it was released.

Prior to the big release of the movie, on January 24, Tuesday night in Mumbai, the producers held a low-key screening event for Pathaan. The star of Pathaan, Shah Rukh Khan, and his gorgeous wife Gauri Khan attended the screening event. The Don actor looked as good-looking as ever in a semi-formal black shirt, black pants that matched, and a dramatic black necklace. John Abraham, who portrays the movie's main antagonist Jim, was twinning with SRK. The Dostana actor  selected a black t-shirt, which he matched with a hooded sweatshirt and black pants.

While Deepika Padukone looked chic in a cosy light brown sweatshirt, Deepika Padukone, who is reuniting with Shah Rukh Khan for the fourth time in her acting career for Pathaan, looked stunning as usual. The actress finished off her ensemble with a pair of brown pants that matched, her trademark loose, messy hairstyle, and light makeup.

For the unversed, Pathaan is the most recent entry in the renowned spy universe created by Yash Raj Films, following the successful Tiger franchise starring Salman Khan and the War movie starring Hrithik Roshan. Pathaan, played by Shah Rukh Khan, is the name of the ex-RAW field agent who, after a protracted exile, returns to the field to defend India from Jim, the extremely dangerous leader of the terrorist organisation "Outfit X," who is portrayed by John Abraham.