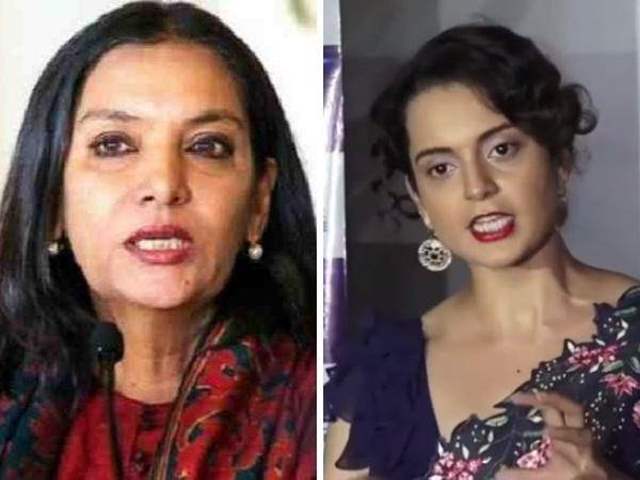 Kangana Ranaut has been at the forefront of every debate against the Bollywood industry. Right from raising her voice around the insider-outsider debate to calling out the alleged drug nexus in the industry, the actress never steps away from sparking controveries with her comments.

In a recent interview, Shabana Azmi reacted to Kangana's attacks on Bollywood and asked her to stick to acting. The veteran actress told Mumbai Mirror,  "Kangana has started believing in her own myth. She says she taught feminism to the film industry, she taught it nationalism I’m glad she spelled that out because nobody else had noticed! I think she fears the day when she will no longer be in the headlines and so has to keep making outrageous statements to stay in the news. Poor girl, why doesn’t she just do what she is best at, which is acting."

Shabana Azmi also opened up about the crucification faced by the industry after actor Sushant Singh Rajput's demise.

"My primary identity is that of being a Hindi film industry and I am very proud of it. Unfortunately, the Hindi film industry is a sitting duck; it is easy to hurl malevolent accusations. It is a systematic campaign to divert attention rom real issues, failing economy, China border tensions, spiraling Covid cases, and farmers’ agitation by putting the spotlight on the supposed ills of the film industry."

She added, "So ‘Justice for Sushant’ has given way to ‘Weed out the Druggies' the goal post keeps changing. Instead of focusing on mental health as a serious issue in our society, it’s sensationalism at play."

Kangana Ranaut and Shabana Azmi's tiff goes back to a long time when the Manikarnika actress had called the latter as 'anti-national.' Kangana had also accused her husband Javed Akhtar of threatening her to apologise to Hrithik Roshan.

DaddyMarvel 3 months ago KR suffers from a severe case of verbal diarrhea. Dumb woman! She is no different than Arjun Kapoor.