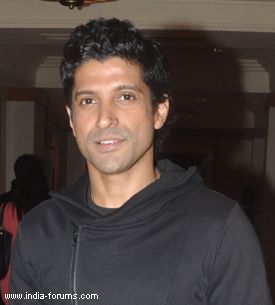 Actor Farhan Akhtar's forthcoming film "Shaadi Ke Side Effects" portrays how an Indian husband yearns to have the life of a single man even after marriage, but he says the plot has no "similarity" with his real life.

In an interview, Farhan gets down to talking about the comedy movie, which stars Vidya Balan, and also about his future projects:

A. Oh absolutely. And you can see the difference in the way I promote the two films. A certain mood of fun and dance has crept into the promotion of SKSE. Of course, we danced while promoting BMB, but it would been unfair and disrespectful to make light of Milkha Singh-ji's life and struggle during the marketing of BMB. SKSE is a more fun-oriented film.

Q. SKSE too has a serious message?

A. I wouldn't say it has a serious message. But it has a heart. It's a heart-warming experience. It's about how the Indian husband yearns to have the life of a single man even after marriage.

Q. Some mediapersons try to connect the film with your own marriage. Is that an embarrassment?

Q. And Vidya Balan...what was it like working with her?

A. To begin with, she's a tremendous actress. So natural, grounded and so uncomplicated. It was a pleasure to be around her. It was a true joy to work with her. We had optimum time together since most of the screen time is shared between us. I'd say we've developed a friendship during the course of the shooting.

Q. Did you know her before this film?

A. No,before shooting the film, we didn't know each other at all. And I don't open up easily to people I am not close to. But the need of the hour was to develop a compatibility. And I did just that. And I didn't regret it at all.

Q. Did the ice between the two of you break immediately?

A. The first thing I noticed about Vidya was that she laughed a lot. She has an infectious laughter. When she laughs, you feel like laughing along. Then we started hanging out together. We shared quite a few laughs. Within the first two days, we began feeling comfortable with one another.

A. I start Zoya's film in May. I am with Priyanka Chopra, Ranveer Singh, Anushka Sharma.

A. That's Zoya for you. We'll be shooting in the open sea.

Q. I hope you're not seasick?

A. I will soon found out. Then I've Vidhu Vinod Chopra's film directed by Bejoy Nambiar. Though I am just an actor in the film, you know how Vinod Chopra is. There is a lot of give-and-take of ideas.

Q. Do you give your inputs to the director when you're just acting?

A. I don't hold myself back. If I feel there's something that needs to be said during shooting, I say it.