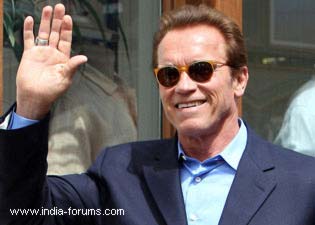 Spicy Indian food has found a fan in Hollywood action man Arnold Schwarzenegger. The actor relished some spicy Indian dishes and naan during his day-long visit to the capital for the 12th Delhi Sustainable Development Summit.

"Arnold Schwarzenegger seems to be a big foodie. I overheard him asking people for some good local cuisine and spicy food," Rajiv Chhibber, manager corporate communications TERI, the organizers of the summit, told IANS.

And it seems Schwarzenegger did succeed in his quest to taste some good Indian food.

"Besides the food, I had a great time speaking to the Delhi Sustainability Summit. I'll share the video as soon as I have it!" Schwarzenegger wrote on his Twitter page.

"I loved the food. I've loved my first trip to India. Here I am with the biggest piece of naan in Delhi. Thank you all, especially @andyz136, for the recommendation to eat at Bhukara. It was fantastic!" he further posted. The naan was specially made for him by the chefs at Bukhara.

Bhukara is a restaurant in Hotel Maurya Sheraton. Schwarzenegger's excitement regarding Indian food was quite evident with his first tweet after landing in the capital, asking people to suggest him some good restaurants.

"Does anyone have some good restaurants or other tips?" Schwarzenegger tweeted.