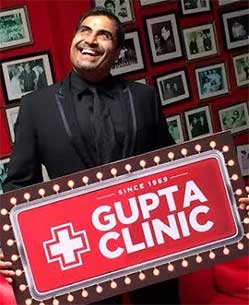 It is well-known in Singh's circle of friends that he doles out advice to all his friends from the film fraternity, and outside.

Singh has woven the comedy about a counsellor on physical relationships, based on his own encounters with various personalities from the film industry.

"A recent survey has revealed that 47 percent of the young couples in the country prefer to spend time watching television or surfing the net instead of being with their partners. This is a disturbing trend. We need to examine why this is so. I'd like to think Saurabh's character shares my concern for the decline in the intensity level among young urban couples."

However, "Gupta Clinic" will have no mention of sex.

"Everyone jumped when they heard I was doing a film about a man who offers advice on physical relationships, they thought I was doing a sex comedy based on those self-appointed in those pokey sex clinics in the smaller towns. But my film is not about sex. There will be no mention of the 's' word at all. I'll be aiming for a U/A certificate."