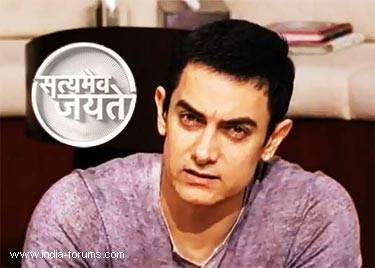 with the viewers and the film star says that he may come up with the second season of the show.

"Right now I have to shoot 'Dhoom 3' and Rajkumar Hirani's film 'PK'. After completing them, I will come back and take a stock of the situation and then I will decide about the second season of the show," Aamir has been quoted as saying.

The actor was speaking at a radio channel 92.7 Big FM.

The 13-part first season has crossed the halfway mark and it has received a spectacular response.

"We have received a dream response... but it has been very difficult for us to review our work. So many things have happened that has made it difficult for our research team to go back to the fields and actually find out the actual impact we have created," he said while interacting with listeners about his show at the radio station.

For the first season, Aamir and his team took two years to do the research work and identify issues affecting common people.

As a starting point for the second season, the team is likely to go back to the roots, assess the impact created by season one, look at other issues that need to be addressed and come back to the drawing board post September to plan a possible season two.

Aamir Khan's show already raises donations every week. And Aamir does not need to donate for organic farming. His family is already running one of the largest organic farms in India. His brother Mansoor Khan left films and film industry, only to work on organic farming!

Aamir's show has made positive impact in real life also. Haters can keep ranting, while the show did make a difference. At least he did something for society, not just commented on online forums.

And his fees goes into production expenses of the show. It's not going to his pocket, nor is this money a patch of what he makes with just one commercial movie he does!

honestyfirst 8 years ago good work amir...i will be waiting for season 2 to see wat has improved

atominis 8 years ago Firstly, congratulations and full marks to Aamir Khan and his team for this season of Satyamev Jayate! At least some powerful person thought of using his stature in a positive direction! Satyamev Jayate is another feather in cap of Aamir Khan Productions and a milestone on Indian television. Great and pathbreaking as any other Aamir Khan project!
Thanks Aamir for making the show, for the follow up, for raising awareness and raising donations worth crores for NGOs and for inciting not just nationwide but global debate on pervasive issues with Satyamev Jayate. I hope you and your team are able to devise ways to assess impact of your show and come up with a new season sometime in future. This show has given meaning and sanity to the idiot box. More power to Aamir and we want more seasons of Satyamev Jayate!!

heart1 8 years ago Amir Khan smartly made himself look like a social activist! He makes 3 crores per episode, the amount . The entire structure of Indian politics is in the hands or capitalist Aamir is a star through this very capitalism.

The government is involved in all of this and as long as the government doesn't act, it's just a show. The only ones is the one being brought out by Ramdev baba and Anna Hajarey. Ramdev is raising enough awareness yet Indians can't do anything about it.

3Idiots had the maximum ticket prices for any Bollywood movie , Dabbang had half the prices of 3I, A businessman can't be a social activist unless he pulls off a Bill Gates.

If Aamir is concerned, he can donate money and promote organic farming, can't he? But instead he is charging more money than ordinary Indians make in their entire life for 1 episode and raising awareness? Hey, anybody would raise awareness by getting 3 crores for an hour.

This show is just a reality show aimed at earning money by pretending to be social activists. It doesn't help. People will watch the show and ignore it next day. Unless development starts from the grassroots, it's never helpful . A show can't bring development when the government is completely opposed to it. The government should be the one initiating, I have a wound and I'll show it to everyday but only a doctor can treat it but here Aamir will be richer and people will say how he is a genus and yeah.

.Dulcet 8 years ago a second season would be damn amaazin :) ..

and and cant wait for Dhoom3 :)

Avatarana09 8 years ago A second season for this show is really welcome. The concept of seasons is indeed refreshing. It would pave way for a saas-bahu torture-free Indian television from free of cost saas-bahu tortures. Good for the society as a whole.

NivFemirist 8 years ago Its awesome show. Waiting for season 2.