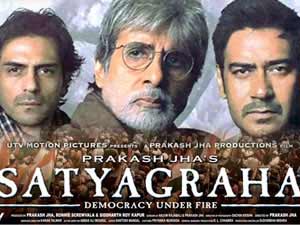 He has a knack for making political thrillers and with his next film "Satyagraha", coming out Friday, director Prakash Jha will focus on the common man and highlight his aggression, struggle and demand for justice.

If the promos are anything to go by, there will be intense performances by the ensemble cast led by Amitabh Bachchan. Ajay Devgn, Kareena Kapoor, Arjun Rampal, Amrita Rao and Manoj Bajpayee also feature in the movie, which will be the solo Bollywood release this Friday, giving the political thriller an edge at the box office.

The trailer of the movie gives an insight to the plot, which revolves around the character of Big B, who goes on indefinite hunger strike in the Gandhian way to demand justice.

The scenes might remind the audience of the 2011 incident when social activist Anna Hazare went on a similar strike against the government. However, Jha has denied that Big B's character is modelled on Hazare.

In an interview, he said: "The film is not based on Anna Hazare and has nothing to do with the movement. The entire process of 'satyagraha' comes from Gandhiji. Mr. Bachchan plays the role of a 'satyagrahi' who believes in truth."

Primarily shot in Bhopal, "Satyagraha" has been produced by UTV Motion Pictures and it has reportedly been made on a budget of Rs.50 crore.

In times of aggressive promotional and marketing schemes, Jha emphasised on utilising the digital platform to spread the word about the film.

However, its unclear how big the impact of the movie will be as the screens have not been locked yet.

The music of the movie has been given by musical duo of brothers Salim and Sulaiman Merchant. The song "Raghupati raghav", sung by Rajiv Sundaresan, Shivam Pathak and Shweta Pandit, has been appreciated by the masses.

A film is a mirror to the society and how convincingly and logically "Satayagrah" follows the plight of the common man, the weekend shall decide.