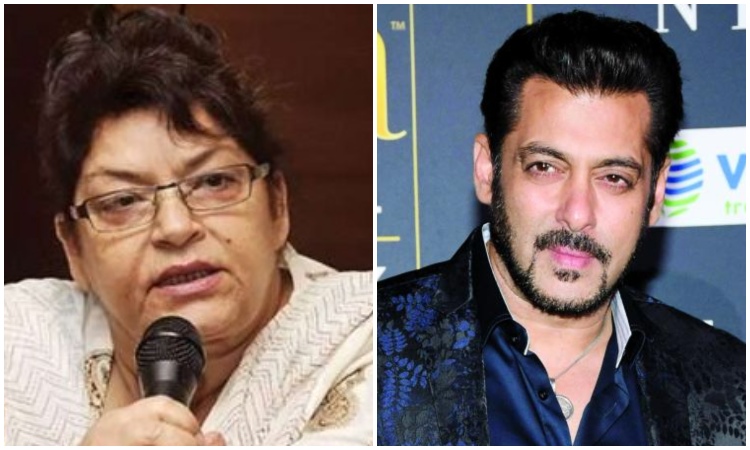 Bollywood's ace choreographer Saroj Khan defined a whole generation. She was the master to the actors who ruled the industry with their dance steps, she also made us grove with her world famous steps and has worked in films like Biwi Ho To Aisi (1988) and Andaz Apna Apna (1994). Her contribution for B-town has been enormous and we still grooving on the dance steps choreographed by her is a proof! If fact Sridevi and Madhuri Dixit were under her wing and as she proved to be their stepping stone into B-town.

However, according to a recent report, the choreographer complained that the industry doesn't give her work anymore, Salman met her and promised to give her work in his future projects.

Salman met Saroj at his residence on Thursday. Saroj, whose pairing with Madhuri Dixit led to magic onscreen in films like Ek Do Teen (Tezaab) and Choli Ke Peechey (Khalnayak), had reportedly said that the industry had stopped giving her work. According to the report, when Salman got to know of it, he asked her to meet him.

Speaking about the meeting, Saroj said: "When we met, Salman asked me what I was doing nowadays. So I told him honestly that I don't have any work [film offers], and that I am teaching Indian classical dance to young actresses. Upon hearing that, he said, 'Now, you will work with me'. I know he is a man of his word, so he will keep his promise."

Earlier, Saroj Khan mentioned that she was to work with Katrina Kaif in Thugs of Hindostan but the actor refused to work on the song without rehearsals. She was quoted as saying: "For a while I had lost interest but now looking at the haalat of dance, I want to do something good for the industry. I can't judge actresses because I have only seen them in songs choreographed by others. Katrina looks good and there was a chance of collaborating on Thugs of Hindostan. But as the shoot was coming up, she told the makers she wouldn't do the song without rehearsals and I was summarily replaced with Prabhu deva."

Saroj has choreographed a song, which features Madhuri Dixit, in Kalank. She said, "Four years after Gulaab Gang, I've choreographed another song for Madhuri. All through the film (Kalank) she makes others dance and never dances herself, then, in the climax, when Varun's (Dhawan) Zafar enters the kotha, she breaks into a mujra. Tabahi is a sad, situational song with fast-paced beats. Madhuri and I danced our hearts out and I'm hopeful that after seeing it, people will remember Saroj Khan again. After just reading about it, Kangana Ranaut with whom I had worked in Tanu Weds Manu earlier, called me to do a song, Rajaji, in Manikarnika: The Queen of Jhansi."