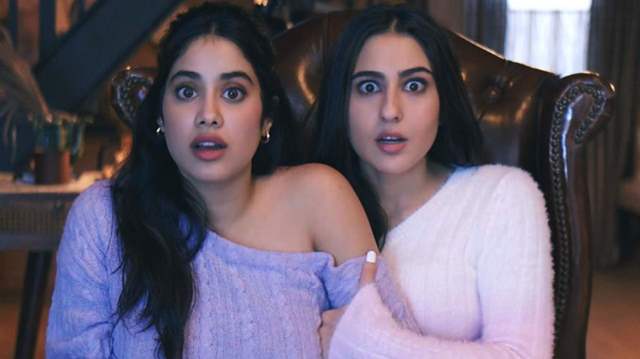 It's rare that contemporaries in B-Town gets along with with each other and turn it into a close-knitted friendship. But seems like our Gen Z actress's, Sara Ali Khan and Janhvi Kapoor have chosen a different path and have proved their friendship at every point of time.

Be it going on adventurous trips together or supporting each other's projects, they have had each other's backs. Now Sara Ali Khan has an exciting news to share. She took to her Instagram handle and shared a picture with Sara Ali Khan.

In the snap, the starlets could be seen donning a one-sided cozy warmers. While Janhvi was seen in a purple pullover, Sara donned a baby pink one. They made 'the surprised' expression in the snap shared by Sara which she captioned as, "From brewing koffee that was hot, now finally as ko-actors we shot ☕ 🔥 🎥 👯‍♀️ Wait and watch us- tell us what you thought 💭@janhvikapoor".

It would be exciting and interesting to see these divas share the screen space and show their camaraderie.

The ladies made heads turn and were in the headlines when they made an appearance together on Koffee With Karan's season 7. They spilled beans about their personal as well as professional life and also shared anecdotes about their adventurous friendship.

On the work front, Janhvi Kapoor was recently seen in the film 'GoodLuck Jerry' and has been highly lauded for her performance. The film which was released digitally on Hotstar was hailed by the audience. Apart from this, she will next be seen in 'Bawal' alongside Varun Dhawan.

Meanwhile, Sara will be seen in 'Gaslight' alongside Vikrant Massey. She will also be a part of  Laxman Utekar's untitled next and will co-star with Vicky Kaushal for the first time.

+ 17
3 months ago Nepo kids starring together in a project😒