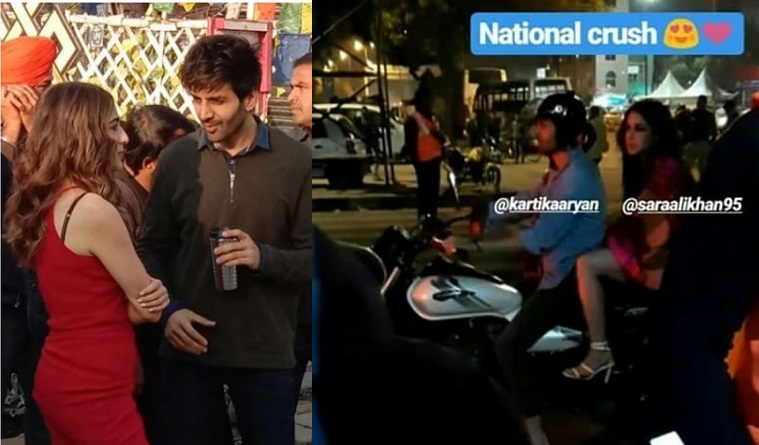 Saif Ali Khan and Amrita Singh's daughter Sara Ali Khan made her debut in Bollywood last year with the film Kedarnath alongside Sushant Singh Rajput.
The actress was later seen in Simmba opposite Ranveer Singh which turned out to be one of the biggest hits of 2018.
Sara also made headlines when she appeared on Koffee with Karan along with her dad Saif Ali Khan where she admitted having a crush on Bollywood actor Kartik Aaryan. And the duo is now shooting for Imtiaz Ali's Love Aaj Kal 2.
A few days back a video which saw the stars locking lips within days of the film going on floors went viral over the web and now a new picture of Kartik and Sara is making rounds over the internet. The duo is seen heading for a bike ride.
Take a look at the picture:

Interestingly, Sara Ali Khan's father, Saif Ali Khan was a part of Love Aaj Kal along with Deepika Padukone. Now, Sara will be starring in the sequel of this superhit romantic film.
The film being shot in Delhi and every now and then we see new pictures and videos going viral over the web which is making fans more excited for the film.
Stay tuned for more updates.
0 Likes

Kasautii Zindagii Kay to witness a new entry in the show ...
16 minutes ago

Aishwarya Khare and Anjani Kumar Khanna roped in for Naagin ...
25 minutes ago

Rashami Desai, Arun Govil, Ravi Dubey and others hail ...
an hour ago

Sushant Singh Rajput Death: Forensic team may have Missed a ...
an hour ago

Naagin 5: Surbhi Chandna to have twin sisters in Ekta ...
2 hours ago

5 Reasons why the upcoming episode of Roadies Revolution ...
2 hours ago
View More
TOP