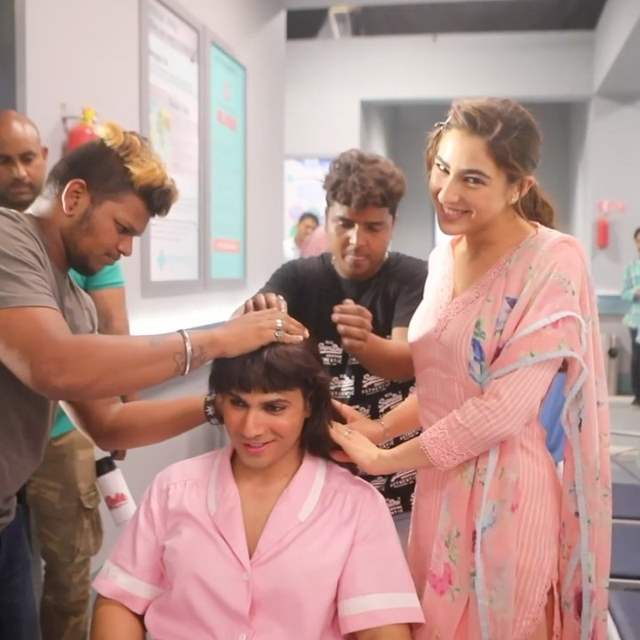 Sara Ali Khan is gearing up for her Christmas release, Coolie No.1. She made her debut with Kedarnath and received a lot of praise for her role in the film. Sara has worked with different stars in all her movies and this one is no exception. Coolie No.1 pairs her up with Varun Dhawan and glimpses that have come out so far show the sizzling chemistry shared by the two onscreen.

Recently, Sara shared a BTS video from the sets of the film. In the video, Varun Dhawan can be seen prepping up for playing a nurse. While the make up artists are working on Varun's appearance, Sara can be seen sweetly mocking him. She calls him Varuna and the caption accompanying video reads, "Meet the hottest Nurse ever (Nurse Emoji) Varuna Dhawan (Starry Eyes Emoji)"

Ever since the teasers have been out, the one point of talk has been Sara and Varun's smoking chemistry. Both have looked like a great pairing and also seem great together. The point only gets stronger after one sees them shaking a leg together on dance numbers like 'Husn hai Suhaana', 'Teri Bhabhi' and 'Mummy Kasam'.

Sara will next be seen alongside Varun Dhawan in Coolie No.1 which releases on Christmas, directed by David Dhawan and produced by Vashu Bhagnani, Jackky Bhagnani & Deepshikha Deshmukh. The film also stars Paresh Rawal, Rajpal Yadav, Javed Jaffrey and Johnny Lever.