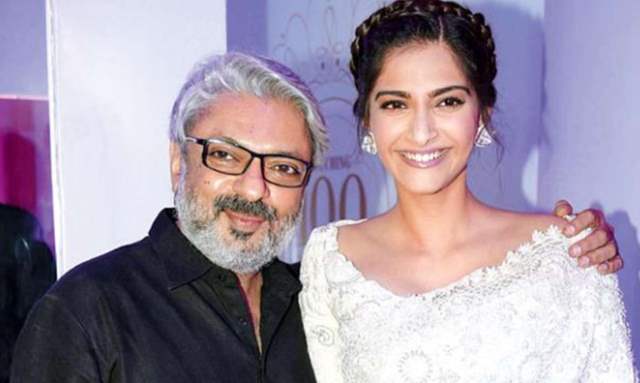 Sanjay Leela Bhansali is one of the finest filmmakers in the Indian film industry which is blessed with his magna opus compositions that have no competition. Many Bollywood stars dream of working with the ace director, but not everyone is lucky enough. Lately, many stars have been seen visiting the director, and every time an actor’s car drives into the filmmaker’s office the rumours of a collaboration abound. The recent one to visit him is Sonam Kapoor!

Sonam Kapoor Ahuja’s recent visit at SLB’s office has left the fans excited to know about the details of their new projects. However, as always it seems to be just another friendly visit.

A source reflected on the buzz around Sonam’s collaboration with Sanjay Leela Bhansali and informed Spotboye, “No such thing!”

“Like all the other stars who were seen visiting Mr Bhansali’s office, Sonam just dropped in for a chat since they go back a long way,” added the source.

For the uninitiated, Sonam Kapoor’s affiliation with Sanjay Leela Bhansali goes way back to 2007. He was the one who launched the actress in his film Saawariya (2007). While the film failed to impress the fans and draw impacting numbers at the box-office, it was a film that kicked off both Sonam and Ranbir Kapoor’s career.

The Gangubai Kathiawadi director is reported to be a bit angry over the rumours of his collaboration with Sonam and clarified, “There are many actors who come to visit. We chat over a cup of tea. We don’t have to work together just because we are meeting socially.”

Well, let us hope this puts an end to all the speculations!

Previously, Deepika Padukone, Kartik Aaryan, and Ranbir Kapoor decorated the headlines for visiting the filmmaker’s office to discuss projects. They all turned out to be friendly visits.

On the career front, Sanjay Leela Bhansali, recently completed 25 years in the industry, having credited himself with movies like Bajirao Mastani, Padmaavat, Devadas, films with soul like Black, Guzaarish, Khamoshi and many more.

1 months ago Anyone will be stressed, if Sonam is planning to do their movie 🤣