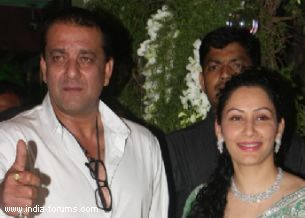 Incarcerated Bollywood actor Sanjay Dutt's wife Manyata is suffering from a heart and liver ailment and her current health condition is a matter of concern, her doctor said here Saturday.

"She has complained of chest pain and sudden weight loss. During tests we detected a large tumour growth on her liver," her cardiologist Ajay Chaughule told IANS.

Maanyata is also suffering from irregular heart beats and the tumourous growth is also causing concern, said Chaughule who is attached with Global Hospital, Mumbai, and specialises in heart and liver problems.

Asked whether the condition was serious, Chaughule declined to comment, but expressed hope that she would recover.

Though she had been advised to consider an angiography, Manyata opted for a second opinion with Chaughule.

However, the decision making process on her further course of treatment is reportedly being prolonged in the absence of her husband Sanjay, who is serving his 42-month sentence in Yerawada Central Jail, Pune.

This is believed to be the reason why Sanjay sought a parole and was granted the facility late Friday night, but it has evoked protests and opposition from various quarters.

Home Minister R.R. Patil has sought a report from the concerned departments to ascertain whether the actor is eligible for a month's parole on grounds that Manyata is reportedly ill.

An official said that police may also try to verify the nature of Manyata's illness before a final decision will be taken in the matter.