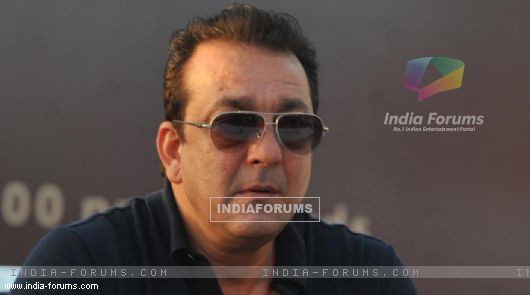 Actor Sanjay Dutt, who was released on a two weeks' furlough by the Yerwada Central Jail (YCJ) authorities Wednesday, has returned home here. He says he has lost a lot of weight.

Looking fit in a white shirt, the "Munnabhai M.B.B.S" star spoke to reporters after reaching his residence here.

He even quipped that he has an eight-pack abs now, and that he can't remove his shirt to show them off.

Earlier, he had taken furlough on medical grounds in October 2013 for 28 days, followed by a similar leave for 28 days in December 2013, to tend to his ailing wife Manyata. The latter had sparked protests.

His wife's prolonged illness prompted him to seek further parole in January for another 28 days.

Time and again, his demand for a parole has raised questions.

To that, Sanjay said: "I didn't get any special treatment. I had applied for furlough five months back, then later it was sanctioned. Thanks for all your support."

Meanwhile, Sanjay is aware that his filmmaker friend Rajkumar Hirani is making a biopic on him, but said: "I don't know what's the status. I will talk to him about it."

While inside the jail, Sanjay says he has "written 10 scripts and I will start working on them soon".

Sanjay was convicted for illegal possession and destruction of an AK-56 army assault rifle during the 1993 Mumbai communal conflagration before the March 12, 1993 serial bomb blasts in the city.

Following a Supreme Court directive, he had surrendered May 16, 2013, and was shifted to the high-security YCJ in Pune to serve the remainder of his 42-month sentence.