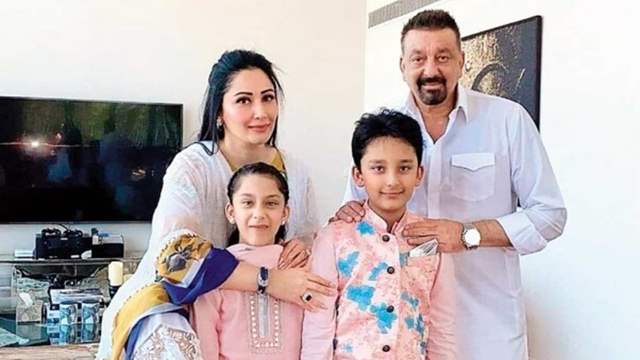 Sanjay Dutt has been quite busy lately, filming nonstop for his upcoming projects. While his film KGF: Chapter 2 recently hit theatres, he has a bunch of other projects in the works.

The Munna Bhai MBBS actor looks forward to some leisure time between projects so he can spend time with his children, 11-year-old twins Shahraan and Iqra, who have lived in Dubai for the past two years. The actor-producer spends time with his family by travelling back and forth.

Sanjay describes the arrangement by saying,

“I am happy that my kids are studying there. My wife Maanyata also has her own things to do there. In fact, I spend a lot of time with them in Dubai when I am not engaged with professional commitments here. I fly in and out. I will be with them during their summer break. I will go wherever they are.”

Sanjay's children have been in Dubai since the first lockdown in early 2020.  Further talking about he expresses that they could have absolutely been here, but he sees that they love it there. They enjoy their school and extracurricular activities. His wife's company has set up shop there. They have all developed here and done fine despite being surrounded by the film industry. He also added that It wasn't a planned move to send them there. It just happened naturally. Maanayata was running her own business in Dubai when the opportunity arose, and she decided to take the kids with her.

His performance in KGF Chapter 2 was hailed by all his fans as well as the critics and the film has been doing immaculately well at the box office.