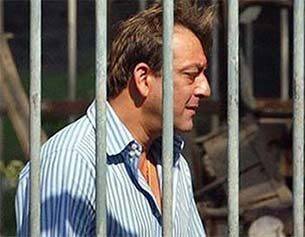 Sanjay Dutt has been released on month's parole to take care of his ailing wife Manyata.

Dutt stepped out of the Yerawada Central Jail here Saturday and is returning to his Mumbai residence.

The 54-year-old had applied for a month's parole saying he wanted to take care of his sick wife who has complained of chest pain and sudden weight loss earlier this month. Her cardiologist Ajay Chaughule said that she has detected a large tumour growth on her liver and she is also suffering from irregular heart beats.

He was previously granted parole for a fortnight due to medical reasons Oct 1, which was extended by another 15 days and he returned to the jail Oct 30.

Dutt has acted in movies like "Munnabhai M.B.B.S", "Lage Raho Munna Bhai" and "Agneepath(2012)" in the past few years.

The actor was sent to jail to serve the remaining 42 months of his five-year sentence for his involvement in the March 1993 Mumbai serial blasts. Having served 18 months in jail before his trial began, Dutt started his stint in the jail May 16. In prison, he has been assigned the task of making paper bags which are sold outside through some NGOs.