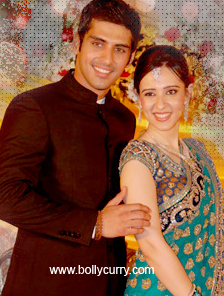 i has officially introduced his bride, Ritika, to the film fraternity via a grand reception party!
Although the wedding itself was a family affair with no celebs present, the reception was the complete opposite! The affair was held at the Cricket Club of India (CCI) in Mumbai and reportedly had a guest list of 200.
The bash saw Sammir's friends and well-wishers from the film industry turning up to wish the newly-married couple. Spotted were Sammir's I hate Luv Storys co-stars Sonam Kapoor and Imran Khan who attended with his wife Avantika. The guest list also included directors Punit Malhotra and Siddharth Malhotra, along with Aditya Thackeray, Shaina NC, Manish Munot and Manjari Phadnis among many others.
The couple tied the knot on March 12th in a low key traditional ceremony in Dehradun where Ritika grew up.
BollyCurry wishes the newlyweds a happy and long married life!