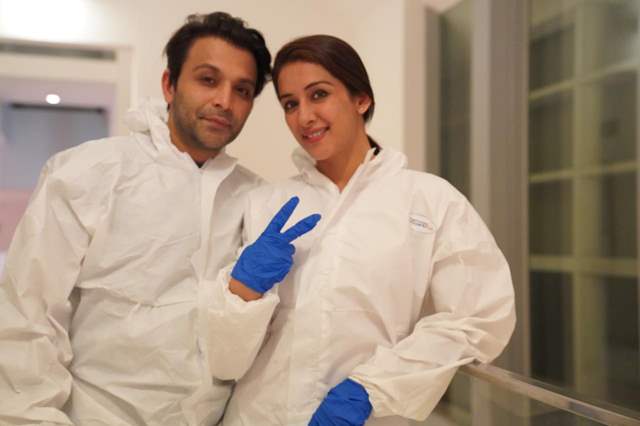 We might have seen many music videos coming up during this pandemic time but here is one exceptional one, where the actor and the singer shoot each other’s part without a single crew on board. Soniye Heeriye fame, Shael Oswal known for his romantic singles, launched his latest song titled ‘Tere Naal’ along with actor - director Sameksha. The singer launched the audio and the teaser of the song two months back got overwhelming response for it. Unfortunately because of the lockdown announced in Singapore, where they reside, had to wait for the main song to be shot.

The concept of the song ‘Tere Naal’ is about a couple who by profession are doctors and have been duly performing their duties amid this hard hitting time. Things go haywire when the wife is tested positive and the husband is trying his best to save her while he is home quarantined. The song travels through their lively and romantic pasts and switches to the present time. The situation is very relevant for people who have faced situations and longed for the loved one's recovery.

Speaking about the song, singer Shael says, “It was Sameksha's idea to go ahead and shoot the song between the two of us. She knew the teaser and audio did great and fans wanted the main song out. So we decided to shoot the entire song in and around my house itself. She not only did a fantastic job on screen but also off screen as she did my make up, and also handled the camera and direction. It took us a few days to shoot the entire video but I am very content with the final output. The song is a soothing, soulful number and our intension is to spread more and more love in these stressful times".

"Tere Naal will always remain special to me because we shot the song in not-so-normal circumstances. Shael and I literally shooting each other’s part. For portions were we were required to be in same frame, we used tripods and my maid’s help. So yes you can technically say that our maid turned cinematographer for us which would be the first of its kind in music business and guess what, we are quite happy with the outcome. Infact we have given credits to my house staff in the credit section of the song. This is the first time I did a music video under such circumstances but I need to say that it was an experience worth remembering”.

'Tere Naal' is a tribute on behalf of Shael and Sameksha to the Corona Warriors who have been braving it out and saving millions of lives. The original concept of the song was changed after noticing the amount of hard work doctors across the world have put in to save lives in these hard times.

'Choti Sardarni's Nimrit Ahluwalia On Doing Own Makeup & Other Changes ...

The Bhatts were involved throughout: Ankit Tiwari on his ...
10 minutes ago