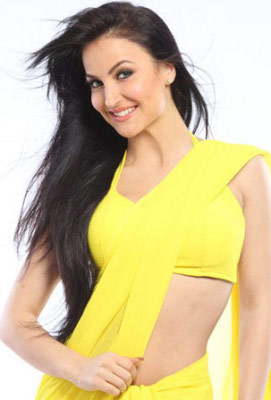 Bollywood aspirant Elli Avram of Swedish-Greek origin, who has been eliminated from the 'Bigg Boss Saath 7' house, can't hide her gratitude for the warmth that the reality show's host and Bollywood star Salman Khan's extended to her.

"I don't know why he was so nice to me. He is a big superstar. And his kindness meant a lot to me," said Elli, who was evicted on Saturday.

She comes away from Bigg Boss with a good feeling about most of the inmates.

"My friends say, I find everyone to be good and likeable. But I can't help it. I don't have unkind thoughts about anyone inside the 'Bigg Boss' house."

"Yes, there were stressful moments and ugly scenes with some of them. But it was soon okay," she added.

"If you ask me, who my special friends are I'd say Hazel Keech. She was the first to leave Bigg Boss house. But during her last three days in the House we really bonded very very well. Hazel is someone I'd like to meet again now that I'm out of the house," she said.

Another close friend Elli has come away with is Ratan Rajput.

"She sent me a sari for Diwali and I wore it for my farewell episode on 'Bigg Boss'. I hope Ratan was watching," said Elli who is also fond of Sangram Singh and VJ Andy.

stranger.67 6 years ago Elli is so cute love the way she is learning hindi very fast!

princessonline 9 years ago NOOOOOO! Aamir is on a role with great movies. Wouldn't want that streak to end by having her opposite him in an upcoming movie!

nish0910 9 years ago aww :D
shes alot taller than him!
she just needs to focus on her acting first :D
once she gets a little better, then :D

desigrl05 9 years ago is she stupid? katrinaji to be even in a frame w/ amir khan u have to put in skillss...

Evash 9 years ago how can she even think of acting with aamir!!!! i think she shouild stop dreaming and watch all of her movies to see what we all see!!!!!!!!

hindu4lyf 9 years ago She's nowhere near as good as Aamir. I don't really want to see them together.

.SilentPrincess 9 years ago Isn't she like 4 inches taller than aamir
I don't want them together, her acting doesn't match upto aamir's. She's incredibly pretty no doubt but she still needs to improve in the acting section

-GorgeousGirl- 9 years ago I Hope Her Dream Comes True..
And Wish Her A Very Happy Successful Life.. :))

prettywomen22 9 years ago would be a nice combination. Katz, after Aamir, add SRK as well in the wish list. Would love to see yourself and SRK together onscreen.