View Profile
After all rumors and miffs, Bollywood's top-notch Khan rivalry is at war again.
When the Hollywood superstar, Tom Cruise, decided to visit 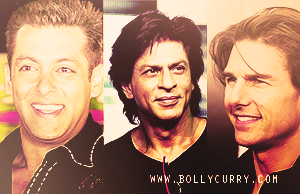 India to promote the latest installment of the super hit Mission Impossible series, which also stars our very own Anil Kapoor, Bollywood's biggies were more than eager to host a gigantic event to welcome the star.
The news of his coming spread like wild fire, sending actors like Salman Khan and Shahrukh Khan expressing equal interest in welcoming the superstar. While Shahrukh desires to invite Cruise over at his residence Mannat, Salman's also not leaving any stone unturned in order to give Tom a never-to-forget experience in a five star hotel.
The buzz is that Salman has received the a green signal from the producers who've asked Tom to come and promote his new movie in India. While Salman's busy making his arrangements, apparently Shahrukh, on the other hand, has spoken to Anil - who now seems to be a friend to the superstar - about wanting to throw a welcome bash.
Whether it is movies or Tom Cruise, this Khan war seems never ending. All we can do is wait and watch to see who wins this particular battle!