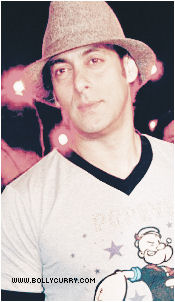 g Boss season 4, macho man Salman Khan is back with a bang!
If rumours are to be believed, our superstar is hitting the news this time for a daredevil stunt. Salman, for Pepsi-co's Soft Drink Mountain Dew of which he is the first celebrity endorser, has donned the Khiladi avatar and will be wingsuit flying, much to the surprise to many. Wingsuit flying is a new sport where one flies through the air in a special jumpsuit and pulls on a ripcord for a parachute to emerge upon nearing the ground.
The star Khan jumped from a dizzying height of 10,000 feet for the stunt sequence in the 45-second commercial. The ad sequence was shot in the exotic locales of New Zealand. Salman, while initially a little fidgety about doing the stunt, got over his unease, hence living up to the punchline for the pop drink - "Darr ke aage jeet hai...," and performed the daring task.
Reminds one, inadvertently, of why he is so aptly Bollywood's very own Dabang!
Will the stunts be limited just to the adverts? Or, is the beginning of a possible competition to ensue between Macho Salman and tinsel town's branded Khiladi, Akshay Kumar?