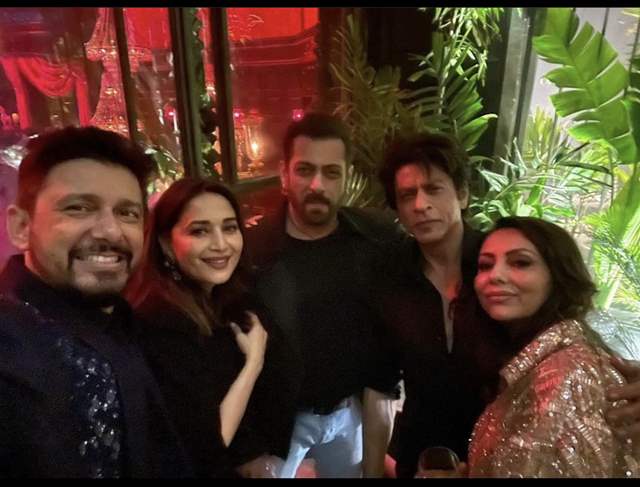 Karan Johar’s 50th birthday bash was organised a few days ago but the buzz still continues to exist. Every day new pictures and videos from the party are making their way to the social media and sending the fans into a flurry.

While we have already seen the happy selfies of our 90’s divas, here comes another picture of the OG gang which will transcend you back in time and send you for the ultimate nostalgic ride.

In the picture we can see the Hum Tumhare Hai Sanam cast posing with their better halves. The picture includes Dr Sriram Nene, Madhuri Dixit, Shah Rukh Khan, Salman Khan, and Gauri Khan. Their movie was released back in 2002 and now 20 years later we get to witness them back together sharing the same bond and dishing out the same good old vibes.

Karan Johar’s birthday bash was a starry night with almost every known face of the fraternity marking their presence. The theme was black and bling and celebs didn’t leave a stone unturned to flaunt their best ensembles and make it look almost like a met gala event.

Meanwhile talking about their professional engagements, Shah Rukh Khan has a slew of projects in the pipeline. He will next be seen in Pathaan alongside Deepika and John Abraham. Salman Khan on the other hand will next be seen in the third instalment of the Tiger series and will feature alongside Katrina Kaif and Emraan Hashmi.