View Profile
Much like the matches themselves, the upcoming inaugural ceremony of IPL #5 is turning out to be quite an entertainer. 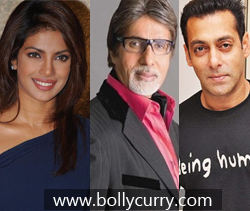 With Bollywood's superstar Amitabh Bachchan all set to grab the mike and bring in the evening with his unmatchable style and presence, and performances from artists such as Colonial Cousins, the evening promises to be as exciting as it can get. Not to mention that this will be Mr Bachchan's first public event post his recent surgeries.
Former Miss World and now a successful actress-cum-singer, B-town's one and only desi girl, Piggy Chops a.k.a Priyanka Chopra is all set to burn the stage with her vibrant performances along with dancing sensation Prabhudeva, who have taken upon themselves to move the crowd and shake a leg on this year's popular numbers.
And if that wasn't enough, to top it all off, Bollywood's current favorite, Salman Khan, is all geared up to present his act in his usual 'turn heads, fasten heartbeats and leave the audience enthralled' approach.
In the past, artists such as Akon, Shahrukh Khan and Katrina Kaif have performed for IPL, but this year, it vows to be bigger and better. It has also been heard that a couple of international artists have been slated to perform for the eve, whose names are yet to be announced!
The curtain will open at the YMCA College of Physical Education Nandanam in Chennai on 3rd April 2012 to a whole hoard of star performances.
Undoubtedly this year, besides the on-field action, IPL's opening night is to be a Bollywood extravaganza. So watch this space for more updates on the glitz and glamour!

Arjun Bijlani talks about his first reaction on being ...
47 minutes ago