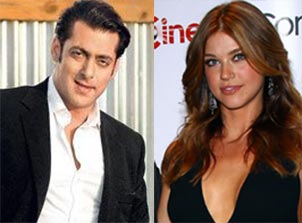 "G.I. Joe: Retaliation" star Adrian Pallicki has apparently been convinced to join her "Dr Cabbie" co-star Vinay Virmani in India for its release in the country.

The Indo-Canadian production, to be premiered in September at the Toronto International Film Festival, is expected to have a grand Indian release a little later in the year when Salman Khan, who is the film's official presenter, would be free of his own big release "Kick".

While the big plans for the Indian release are being kept under wraps the buzz from sources close to the project suggests that Salman is keenly interested in bringing the cast of "Dr. Cabbie" to India for the release.

"While Salman has convinced Izabelle Kaif (Katrina's sister) who has a pivotal role in 'Dr Cabbie', to be in India for the film's Indian release, Adrianne was not so keen until her co-star Vinay convinced her that a trip to India would be just the stress-buster she needed," said a source.

The modalities of the Indian release are now being worked out.

"We do want to come with 'Dr Cabbie' to India. The film is produced outside but its heart is completely Indian. It's the story of a qualified Indian doctor who ends up as a taxi driver in Canada," said Vinay who was last seen as one of the leads in Bejoy Nambiar's "David".

He hopes to consolidate his career in Bollywood and abroad with "Dr. Cabbie".