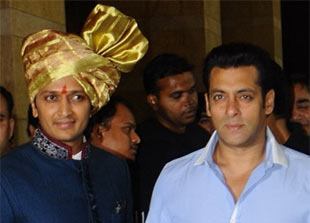 Salman Khan plays a cameo in the forthcoming Marathi movie "Lai Bhaari" and Riteish Deshmukh, co-producer of the film, thanks the superstar for his "gracious offer".

Salman will be seen in a special appearance in Riteish's third Marathi production venture "Lai Bhaari", which also marks the latter's debut in Marathi films as an actor.

"Correction: Salman Khan never approached me for a role - but he graciously offered to be a part of #LaiBhaari - #Respect," Riteish tweeted.

The movie will release July 11.