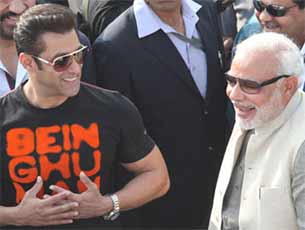 "The website in Urdu is an excellent initiative. Urdu is a beautiful language, which has evolved in India, and I am extremely happy that this innovative idea has been accepted and implemented. It is truly a praiseworthy initiative," Salim Khan said at the launch.

"I thank Salim Khan sahab for launching the Urdu version of my website. I congratulate and thank our volunteers for their efforts in making the Urdu site. If you find mistakes or have suggestions, do share," Modi tweeted following the launch.

According to the Bharatiya Janata Party (BJP), the website, which contains Modi's biography and highlights the development work in Gujarat under his leadership, is one of the many initiatives to reach out to a cross-section of the people.

"It is also one of the many technology-oriented initiatives taken towards putting across his (Modi) views to people across the borders, and his focus on soliciting their views for the nation," the party said.

The website is already available in 11 regional languages and four foreign languages, including Russian, Japanese, Chinese and Spanish along with English.