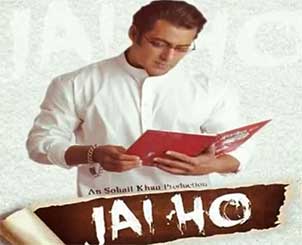 Actor Salman Khan Thursday unveiled the trailer of his much-awaited film "Jai Ho" at Chandan cinema in the presence of media and his fans.

Salman, who has a mass fan following, was in his element, surrounded by his fans, who were whistling and clapping at each shot of him during the trailer.

"If you like the trailer, please stay here and if you didnt like it please move out," he said.

Asked why was the title changed from "Mental" to "Jai Ho", he said: "'Mental' was a working title and if at all we had gone ahead with 'Mental', maybe people have stated calling us as Mental Khan... I dont have a problem but the other Khans may not like it. Besides my father didn't like the title 'Mental' and we must listen to our father... 'Jai Ho' was also suggested by my father."

Directed by Sohail Khan, Jai Ho features Tabu among others.