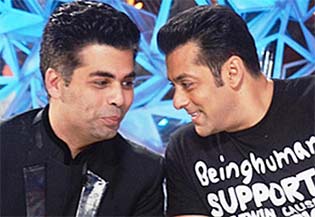 After "Dabangg" star Salman Khan has let the cat out of the bag that he has given the nod to "Shhuddhi". Filmmaker Karan Johar too has announced their collaboration for the project, which will release during Diwali 2016.

Salman was speaking to reporters about his future projects when the news slipped out.

Meanwhile, on Wednesday, Karan took to Twitter to confirm the news officially.

Intially, Hrithik Roshan and Kareena Kapoor were finalised as the lead pair of the film, to be directed by Karan Malhotra. But later Hrithik announced that he had pulled out of the project.

The rest of the cast of the film is yet to be finalised.