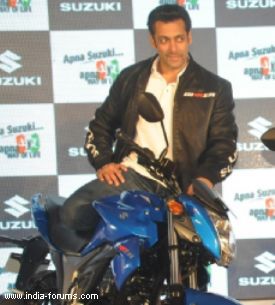 Superstar Salman Khan plans to gift a swanky bike to one of his fans who walks or cycles around 18 km to watch his films.

At the launch of Gixxer bike by Suzuki Monday, the 48-year-old told reporters about this fan of his.

"There is one fan of mine who I have been trying to get in touch with for the longest time. I think during 'Bodyguard' I heard of him. He travels around 16-18 km from his village to watch my film," the 48-year-old said here at the event.

"He doesn't have much money, so whatever he grows like fruits, he exchanges them for the film's tickets from people. He cycles or walks those kilometres. I can't find him but when I do I will give him one of these bikes. What he does with the bike later is his concern but I am going to give him one Suzuki," Salman added.