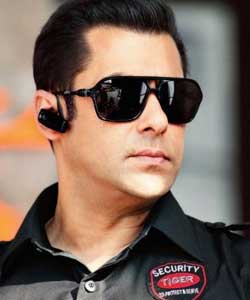 Television has become one of the best medium of promotion for Bollywood and the recent entry of several Bollywood stars like Rani Mukherjee, Vidya Balan, Shah Rukh Khan, guess we could conclude that nothing can beat television to reach a larger audience.

You guys would clearly remember the best bodied Salman Khan made his presence felt in Colors' Laagi Tujhse Lagan for the promotion of the hit movie Dabangg. Well, the latest we hear is that the handsome hunk will apparently make an entry in yet another Colors' show.

A source says, "The channel is keen on getting Salman Khan to feature in Na Aana Is Desh Laado for the promotion of his upcoming and much awaited movie Bodyguard."

"But Salman has been suffering from severe back ache at present and hence the talks are on with the actor", adds source.

We contacted Meghna Mallik who told us, "I have no idea at present about Salman's entry, guess there must be some integration happening in the Channel."

We hope that the Bodyguard does confront Ammaji  and bring in a twist.

Fattoom 9 years ago really .. that is an awesome news .. waiting for u Salman my hero :)

arzoolubsalman 9 years ago omg cant wait for it to happen as i lub sallu :) hope he does tat will give me a chance to watch naa ana iss desh ladoo

Suneel_kumar 9 years ago y salman only comes in colors shows?

he shud also come in other channel shows

SandCastle. 9 years ago Wish Salman chooses a better show...:P
Dont want him in any of the COLORS Crap...!!

Sanjay Choudhary Attacked By Goons; To File a Police ...
46 minutes ago