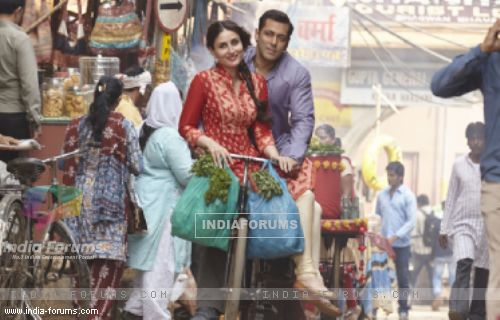 Salman Khan to cycle his way through his fans hearts with Bajrangi Bhaijaan.

Bajrangi Bhaijaan's trailer is out, and the films glimpses show the actor Cycling while commuting in the film. The actor himself insisted on cycling to travel in the film as he considers it lucky for his films.

Salman was last seen cycling in Kick. The cycle scene from Kick was listed as the most memorable scenes of the film and it invited maximum hooting from his beloved fans.Salman is also often spotted cycling at Bandra, Bandstand too.

Considering that his bicycle is his favourite mode of transport, the film's director, Kabir Khan readily agreed to incorporate it in the film, which resulted in Salman travelling on his bicycle throughout the film.

5 years ago It also makes for nice romantic scene Sallu...love you Salman Khan !!!