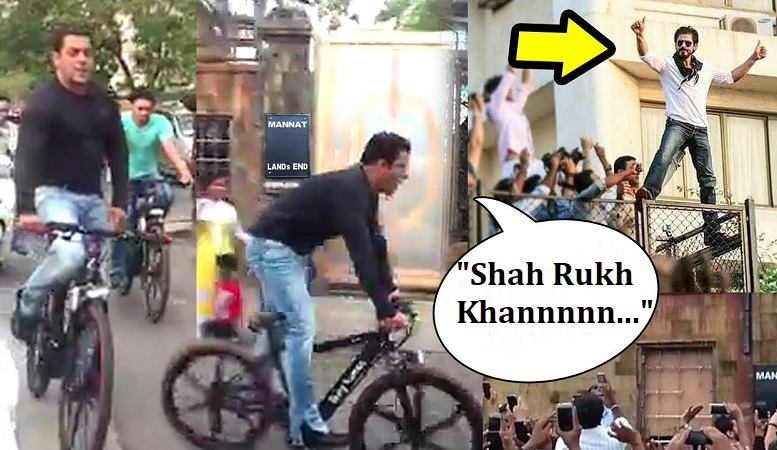 In the days gone by, Salman Khan has been spotted several times cycling on the streets of Mumbai on his recently launched Eco-friendly Being Human cycles. He has been doing so to encourage his fans and other people to cycle more often and to stay fit and healthy.
And, yesterday evening, yet again, he surprised everyone as he took to the streets of Bandstand, Bandra to cycle around. Apart from his cycling there was something more that he pulled up that left all the on-lookers surprised and in awe of the Bajranji Bhaijaan.
While cycling he happened to cross Shah Rukh Khan's bungalow, "Mannat" that is just few minutes away from his residence, Galaxy Apartments. While he was passing by, he shouted "Shah Rukh Khannn..." and ran away. And, all the fans waiting outside Mannat joined him and started cheering along with him.
Watch the video here:

This act of Salman, did remind us of our childhood door bell prank. However, this one surely had a twist. Instead of running away, Salman cycled away. Adorable! Isn't it?
0 Likes