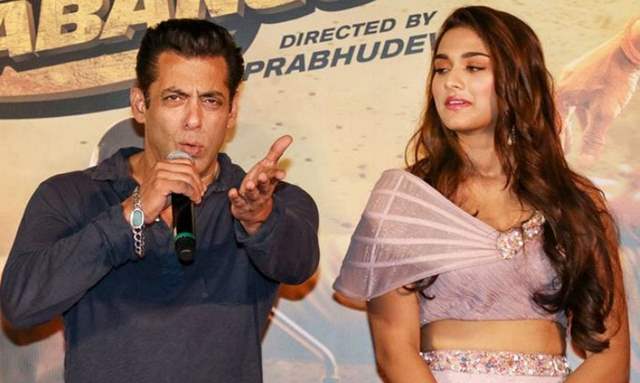 Salman Khan's soon to be released cop drama, Dabangg is making a lot of buzz and for all the right reasons!

Dabangg 3 marks the third installment of the superhit Dabangg series starring Salman Khan as the crowd favorite Chulbul Pandey, and Sonakshi Sinha as the beautiful Rajjo in the film. However, besides the two actors, the third part features a fresh face, Saiee Manjrekar as Khushi in the film.

Saiee plays the love interest of Khan in the film and is all set to make her big debut with this Prabhu Deva directorial.

During the recent interviews of Dabangg 3 held on Saturday, we asked Salman what made him feel that Saiee could be the perfect fit to play Khushi's character in the film. To which Khan replied saying,  "When we wrote the character and we had seen Saiee before, we knew it was her who could play the role."

He further adds, "It was just an instinct, just like how it was with Sona(Sonakshi Sinha). Even when we signed Sona for Dabangg, she had not done anything like that before, but there was a faith in her, an intuition that she could play Rajjo and the same goes for Saiee as well."

Besides, Salman also stated that he feels Saiee has done complete justice to the character and says that the world is going to soon see a superstar.

In a recent interview, Saiee too had expressed her excitement about doing her first film alongside the Bhaijaan of Bollywood, Salman Khan.

She had also shared how Khan had introduced her as 'Dabangg ki heroine' to the whole team, which had made her really happy.

Janmashtami 2020: Urvashi Rautela wishes for good health and ...
4 minutes ago