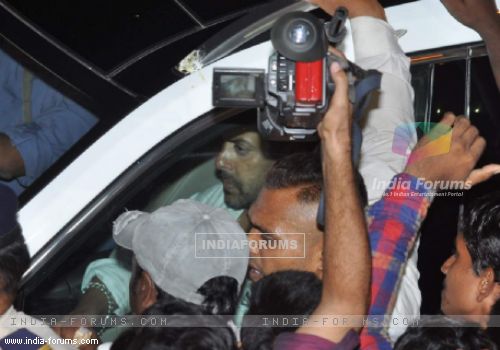 6th May, 2015 was indeed a tough one for the B-town members. After the Sessions Court proved Salman Khan guilty in 2002 hit-and-run case and announced its judgement of 5 years; friends and fans were all shaken up. But, later when the High Court gave a 48-hours interim bail to the actor there was a wave of calmness around.
Just after the verdict was out Salma Khan fell sick and Sohail Khan was snapped taking a taxi to rush to his ailing mother. He didn't even spare a second to wait for his car to arrive.
As the news broke out in media, friends of Salman rushed to his residence, Galaxy Apartments at Bandra to stay beside his unwell mother and give her any possible comfort. These include Sonakshi Sinha and Priety Zinta.
Later in the evening, after our Dabbang star reached home following his two days bail, there were his friends from the industry who without wasting any time reached his doorstep to shower their love and support. Some of the names include old friends Karisma Kapoor, Suniel Shetty, Chunky Pandey, veteran actor Prem Chopra , producers Ramesh Taurani and Ritesh Sidhwani, Angad Bedi, Nikitin Dheer, Nikhil Advani, Kiara Advani, singer Mika Singh, etc.
The visits of near and dear ones must have surely given our brave heart actor some comfort and peace. As tomorrow again the proceedings of the High Court are going to put him and his family through the mental trauma.