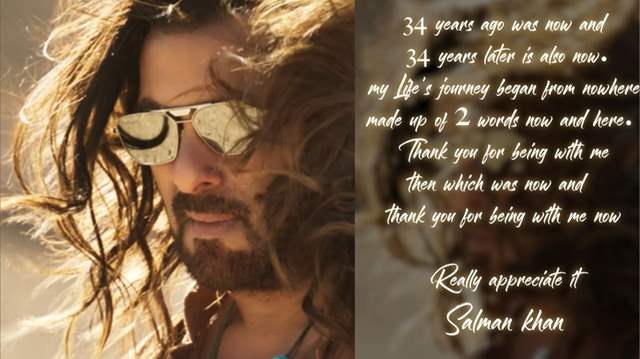 There is no doubt about the fact that Salman Khan is one of the most adored and finest actors in the industry. He shares a massive fan base and they not only adore him but worship him.

For the unversed, On August 26, 1988, his debut movie, Biwi Ho To Aisi, was released. Fans still recall Salman Khan's little role in Biwi Ho To Aisi, despite the fact that his first main role film, Maine Pyar Kiya, was a phenomenal all-time smash at the box office and propelled Salman Khan into the league of the biggest stars of the time.

Celebrating the moment, Salman took to his social media handle and penned a heartfelt note. Along with that he also revealed the first glimpse of his look from his upcoming film Bhaijaan. His note read, "34 years ago was now and 34 years later is also now. My life's journey began from nowhere made up of 2 words now and here. thank you for being with me then which was now and thank you for being with me now, Really appreciate it -Salman Khan"

Salman sported an intense and edgy look in the video. His long hair and glasses gave him a swag and fans couldn't stop swooning over his sporty look. Khan's caption had a hashtag that read, "KisiKaBhaiKisiKiJaan".

Bhaijaan is touted to be an action-comedy film backed by Salman Khan Films and Nadiadwala Grandson Entertainment under the direction of Farhad Samji. Salman Khan, Venkatesh Daggubati, Jagapathi Babu, Pooja Hegde, and Shehnaaz Gill are some of the actors who will star in the film.

The filming has already begun and now Salman Khan's look from the film has beefed up fans' excitement a notch higher.

+ 17
3 months ago The hashtag KisiKaBhaiKisiKiJaan is everything 😂