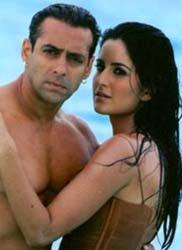 Featured Video
rumours doing the rounds have been about another alleged break-up between Salman and Katrina.  Many different sources have insisted that Kat is no longer interested in being with Salman and both stars have been ignoring each other lately.


However judging by their behaviour at the Star Screen Awards we wonder if this is really true?


According to sources, Salman was busy rehearsing for a dance number on stage and wanted Katrina to be there with him.  Kat, however, was busy with her shoots and by the time she arrived, Salman had finished his rehearsals. Katrina went over to Salmans car and they both talked for very long time. Katrina then went in to rehearse, and we could see from her face, that she was worried about Salman.


When asked why she missed her beau's rehearsal, Katrina's response that she is more eager to see the final act than sit through the rehearsals that can be boring.  Apparently, Salman later returned to show her his act but was unable to as Bips was currently working on hers.  Instead Salman spent some time with Katrina before leaving to get ready for the Awards.


Keeping to her promise, Katrina made sure she had the front seat for Salman's act at the Awards!