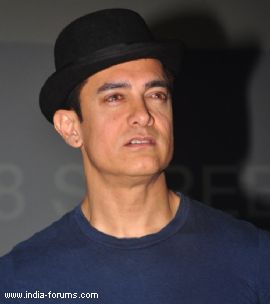 Aamir Khan says his colleagues' good work makes him happy, and lavished praise on his contemporary Salman Khan, describing him as "powerhouse of star power".

At India Today Group's Agenda Aaj Tak conclave Wednesday, Aamir was asked about the Khan rivalry between Salman, Shah Rukh Khan and himself.

He said: "I can answer for myself. I don't have any negative thoughts about competition with anyone and I thank my ammi (mother) for it."

"It's not in my nature. I understand that there are people who think otherwise, but it's not in me to look at another person's work, and think, 'How come he did so well? How will I do as well?' I just don't feel like this."

The 48-year-old, who is awaiting the release of action adventure film "Dhoom 3" later this month, then went on to praise Salman's magic.

"Salman is my friend. He is a bigger star than me. When I see him in 'Dabangg', I feel very happy. Salman doesn't need to do anything. He is a powerhouse of star power."

" Woh sirf belt hilaata hai, chashme theek karta hai, and see his magic. I have no competitive feeling," said Aamir, who is known to be a meticulous method actor.

At the event, Aamir received a request to either perform a bit of tap dance that he has learnt for "Dhoom 3" or to show his perfect body.

Then pointing to the difference between himself and Salman, he quipped: "Salman would have done it both - tap dance and he would have shown his six-pack as well."