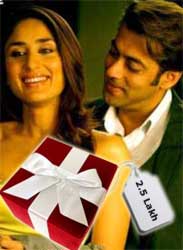 Salman and Kareena, when they were busy shooting in Melbourne for their film 'Main Aur Mrs. Khanna' shared a great off screen bonding too. The two are good friends in real life and enjoyed their stay on the sets apart from the work schedules. Kareena would often go shopping after pack ups and one day Sallu decided to accompany her on one of her shopping sprees. Kareena went berserk shopping. She bought goodies for herself including a designer bag worth 2.5 lakhs. When she reached the billing counter she was astonished to know Salman had paid for all her selections from the store .So touched was Kareena at the thought that she decided to use the bag in the movie.