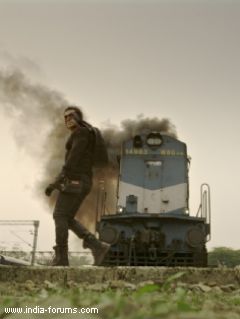 The action packed trailer of Sajid Nadiadwala's directorial debut, Kick has one specific shot that has appealed to majority of the audiences. The scene in which we see the star Khan walk in front of the moving train after a chase sequence on the bicycle has got a lot cheers, claps and whistles from the audiences.

The audiences have tagged it as the most stylish action shot ever. The way in which Sajid Nadiadwala has taken the shot has made it the most celebrated scene of Kick's trailer. It has been shot at Safdarjung station with real time movements.

It is so loved by the audiences that people are trying to edit the shot and make their own version of it, which have been uploaded by them digitally as well.

With death defying stunts and shoots at picturesque locations, the trailer of Kick broke all the records of the maximum number of views in the shortest time span.