View Profile
Filmmaker Vipul Shah, who's cast Akshay Kumar in most of his films, is now set to work with Salman Khan and Ajay Devgan in 'London Dreams'. But he wants a 'trial shoot' to just get comfortable with the two actors. 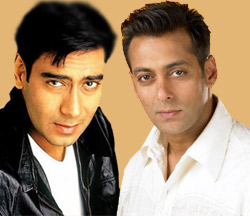 'Just a couple of shooting days with Salman and Ajay so I can establish a comfort zone with them for whenever we begin our principal shooting. I wouldn't want to go on the sets for a major schedule and then get to know my principal actors,' Shah explained.

And he is also to cast a completely new face opposite the seasoned stars.

'We've zeroed in on two girls - both of whom are almost completely new. We'll decide on one of them. I'd have finalised the girl last week, but I got stuck in the controversies regarding the Sikh community (over the film 'Singh is Kinng').'

'Singh is Kinng' once again has Akshay Kumar in the lead. The actor has previously worked in Shah's 'Aankhen', 'Waqt' and 'Namaste London'.

While Shah is producing the film, the director is Anees Bazmi.

'Generally when two directors come together as producer-director like Subhash Ghai and Mukul Anand did for 'Trimurti' or Aditya Chopra and Pradeep Sarkar in 'Laaga Chunri Mein Daag', the film doesn't work. I want to prove that wrong in 'Singh Is Kinng'. I can proudly say I wasn't a selfish producer. I let Anees Bazmi do what he wanted. I stayed in the background completely.'