'Life Mein Humgama Hai ' is my first Hindi film. I was in Std X when I did this film. It was a great experience as I got an opportunity to work with eminent actors like Jackie Shroff, Paresh Rawal, Boman Irani, Urmila Matondkar, Satish Shah and others.

Life Mein Hungama Hai is a journey of two kids Vishy (me) and Sunny (Sonu) from their school in Dehradun to Jamnagar port to board a ship and sail to see the world. Many adventures await them in this journey. The film gives a message about how school and education is important in every child's life. I play the character of Vishy who is an obedient child in school, intelligent and good in academics.
He always feels that nature is the ultimate teacher. 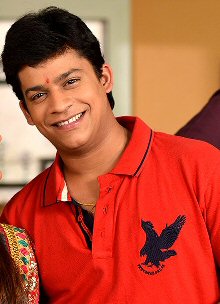 When I read the book as well as the screenplay of the film I was very excited. The film looked promising and challenging. Plus it had a very powerful cast. So I knew I was going to learn a lot while doing the film. The film was a great learning process for me. Being my debut Hindi film it was an amazing experience.

Jackie Shroff was extremely friendly and it was great fun working with him. The scenes with Paresh Rawal were shot in and around Jaipur. It was a great learning experience. Urmila Matondkar made me very comfortable during the song and dance sequence and it is one of the highlights of the film. It was great to see how an actor like Boman Irani can make a small role so memorable. It was a treat to
watch and respond to the comedy of Satish Shah. It is quite evident in the film that Sonu and me had become good friends during the shooting.

Relations with the director Sunil uncle were like family right from the beginning. It was only because of Sunil uncle's support that I could manage studies and shooting easily.

In this film I got a chance to do things like singing, dancing, fighting and a great stunt which I could pull out during the train sequence at that age. This stunt is definitely the highlight of the film and a memorable experience for myself. The songs of the film are beautifully composed, sung and
choreographed.

This film is based on the story by Ruskin Bond which gives a clear message. The film is not just entertaining but thought provoking as well. It is truly a great family film and a MUST WATCH.

I was the first Indian Actor to receive the Best Male Actor award for a Marathi film in the Asian Festival of First Films in Singapore at the age of 13. Even though I received great appreciation and fame for this award, I could remain grounded because of my family, friends and teachers. They impressed upon me that awards are incidental, doing sincere and good work is more important.

Jackie Shroff remembers Rishi Kapoor: He is embedded deeply in my ...

'My Mom-Dad-Brother Died and now I will Die': Jackie Shroff Explains ...

Akshay Oberoi to portray a grey character in his upcoming ...
29 minutes ago