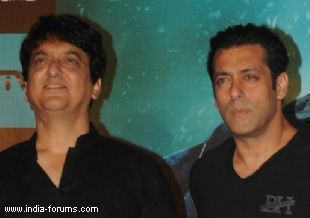 Salman Khan starrer "Kick" is set for Eid release and Sajid Nadiadwala is racing against time to ready his directorial debut as he still has about a weeks' shooting to complete.

"I've no time to sit back and enjoy any of the good things that are happening to my film. We are shooting and running to the monitor," said Nadiadwala.

The film's song "Jumme ki raat" featuring Salman and Jacqueline Fernandez has gone viral since its release on YouTube Friday. So far, it has been viewed by 1,367,376 viewers.

"My ADs (assistant directors) and my team tells me that the response to the first look and the first song of 'Kick' has been unprecedented. I can breathe a little easily now. I wish I had more time to enjoy what I am doing. But we have set an Eid deadline for our film's release. And we will fulfil that," he said.

If fact, Amitabh Bachchan tweeted about the trailer of "Kick", comparing it with the best action films of Hollywood.

"What more can I want? It's like getting the best award possible even before my film is released. To have someone of Amitji's stature saying something like this is a dream come true. I feel I've already got my biggest reward," said Nadiadwala.

The year has been fruitful for the filmmaker whose three production ventures have hit the jackpot at the box office.

"This year has been extraordinary for my production house. We released three films - 'Highway', '2 States' and 'Heropanti'. By god's grace, they all succeeded. Insha Allah, 'Kick', with which I've turned director for the first time, will be a big success," said the filmmaker.

Expectations from Salman and "Kick" are huge, specially since Salman's last release "Jai Ho" under-performed at the box office.

But Nadiadwala is unfazed.

"I am looking neither backward nor ahead. I am not thinking of what Salman has done earlier and what is the competition for my film. I am only focusing on getting it right in 'Kick'," he said.