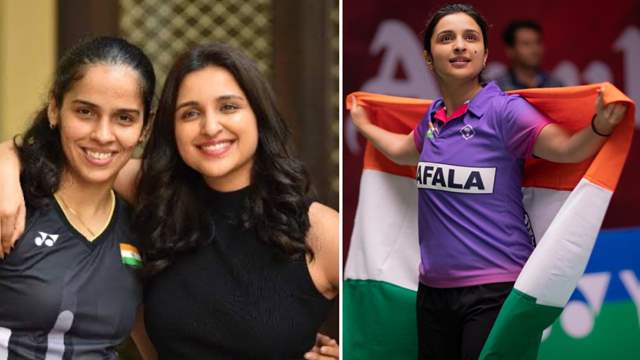 A sport’s icon, who rose despite all challenges, Saina Nehwal’s incredible true story is finally out for audiences to enjoy. While ‘Saina’ headlined by Parineeti Chopra releases today, the biographical drama is already creating ripples with its critical acclaim and positive word of mouth.

However, the biggest validation came from Saina Nehwal’s family who loved the film and were proud to see their daughter’s story unfold on the big screen.

Sharing the reaction of Saina Nehwal’s family after watching the biopic, filmmaker Amole Gupte says in a statement shared by his team,

“Saina's life has been a kadhai of emotions. I showed the film to Saina’s parents to know if I have done justice to their and Saina’s harwork. Yesterday, they saw the film and they called me up. They absolutely loved the film; they got emotional watching their daughter's story unfold on screen. Plus our friends from the industry and sports fraternity shared some encouraging words towards the film. It was so overwhelming for me. It feels I won one battle, now it’s for the audience today onwards.”

Apart from being flooded with praise by the critics, who declared the film a hit and referred to it as ‘an emotional movement’, ‘a rightful ode’, ‘inspiring’, ‘emotional’, ‘empowering and uplifting’, ‘Saina’ also received unprecedented support from the Indian and international sports fraternity as well as the film industry.

Sharing his gratitude on the same, Producer Bhushan Kumar adds,

“The story of Saina Nehwal’s rise from a girl hailing from a middle class family, to becoming an iconic badminton player, is as fascinating as it is inspiring. The positive response of everyone who has watched the film not only makes us feel grateful but also proud to have brought audiences this aspirational story.”

The film was initially set to release in September 2020, but was postponed due to the COVID-19 pandemic in India.

2021 seems to be the year for Parineeti Chopra as she is the only actor to have back to back releases. Her Netflix film ‘The Girl on the Train’ released last month in February followed by Sandeep Aur Pinky Faraar that hit the theatres last week. Both the films received mixed reviews from critics and audiences.