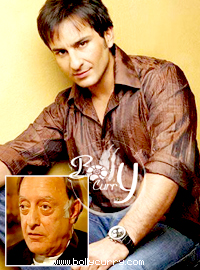 Popularly known as 'Tiger', and a former Captain of the Indian Cricket Team, Pataudi Sr. was reportedly hospitalised on Saturday, yet again, for some complications with his lungs. Whilst the diagnosis is still in process, he has been kept under observation and care in the ICU.

Sources claim it's the second time this month that the Nawab has been hospitalized. Both his children, actors Soha and Saif, are heard to be in active service of their father, putting aside all other commitments. Saif Ali, in particular, has temporarily postponed schedules for his upcoming film co-starring beau Kareena Kapoor, titled Agent Vinod.