View Profile
It's the year of the squeals! With Don 2 being filmed, talks of Race 2 making an appearance are doing the rounds. But rumor has it that Saif Ali Khan, who stared in the leading role in the first movie, is not so keen to join Abbas Mastan for the sequel.
An inside sour 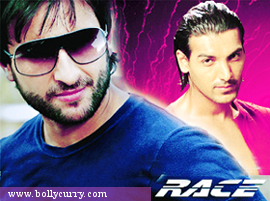 ce revealed that the script just did not appeal to Saif as the first movie had. However, the gist out there was that there was a bigger issue laced behind his denial. Apparently Saif has a problem with fellow hunk John Abraham being part of this film, hence he decided to opt out of it.
Another buzz doing the circuit as to why the Chote Nawab declined to reprise his role, is that Saif is looking forward to starting his own home production. The actor is very much excited about his project and wishes to get this rolling as soon as possible.
Nothing of yet is final. As of now, talks are still on between Abbas and Saif.
Will Saif give in and share screen space with John? Time shall once again tell!