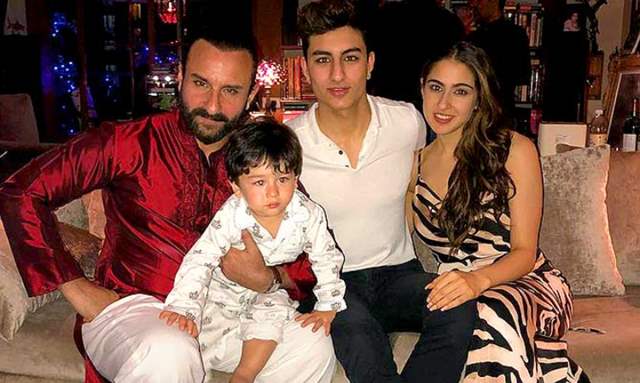 Saif Ali Khan recently made an appearance at co-star Jacqueline Fernandez and Amanda Cerny’s new podcast wherein he spilled the details about his autobiography plans and even spoke about sons - Taimur and Ibrahim and said that he would like them to follow in his footsteps and join the film industry.

The 50-year-old actor is currently shooting for his next in Dharamshala and he recorded the podcast during the same.

Amanda quizzed said about his family’s history in the arts. Saif told her, that his mother Sharmila Tagore’s side of the family is related to Rabindranath Tagore and a long line of artists and painters.

Saif informed, “My mother’s been doing films since she was 16. She worked with Satyajit Ray a lot and did about four or five movies with him. She was his muse, and he thought of her as the ultimate female representation of his art.”

My sister is kind of in the movies, my wife, my ex-wife as well... So all of us. My daughter, my elder son wants to be an actor, and I think Taimur will be an actor for sure, he’s entertaining us already.

The Jawaani Jaaneman actor during his previous interviews mentioned that Ibrahim seemed prepared for a career in acting and that he’d like all his children to be in this profession.

Earlier, when Saif was asked if he is planning to launch Ibrahim. “I don’t know if I will launch him. It’s an option and films are certainly a viable career choice for him. He’s sporty and likes the idea of being in the movies rather than pursuing an academic job. No one in the family, with the exception of his sister (Sara Ali Khan), has been interested in the latter anyway,” he told Mumbai Mirror.

Meanwhile, Saif Ali Khan’s daughter Sara Ali Khan has already impressed the audiences with her performances in films like Kedarnath and Simmba. She will next be seen alongside Varun Dhawan in Coolie.

Sara and Ibrahim are Saif Ali Khan’s children with first wife Amrita Singh. After the couple separated, Khan married Kareena Kapoor Khan in 2012. They already have a son, Taimur Ali Khan together and are expecting their second child as well.

mansaf 5 days ago Yes ofcourse, why not bollywood is not for talanted anymore but a family legacy. 🤐